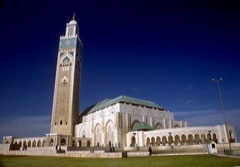 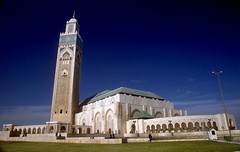 Casablanca the economic capital, looks like an International town, thanks to the importance of its port it is a business, touristic and religious centre; the mosque Hassan II is one of the most beautiful in the world.
This modern Moroccan town facing the Atlantic Ocean has some important historical buildings.

The town is a mixture of past and future times. The old Medinas and the new buildings with a strong mixing of architectonic styles. In Casablanca, there is a huge industrial area, a lot of banks and financial institutes. Here the seasons are mild: during Winter the temperature is around 15° degrees, while during Summer around 30° degrees.

The Hassan II Mosque with a minaret of 210 meters high. It’s one of the biggest in the world, was built by the French architect Michel Pinsean, to celebrate the birthday of King Hassan II. 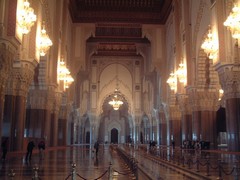 The decorations are magnificent precious marbles, beautiful mosaics and Murano glass chandeliers. Inside it, there is a Koran school (Medersa), a library, and a hall for meetings, while in its vault there are a lot of purification halls. In the old Medina, there are narrow streets, the walls belong to the 16° century. The new one was built at the beginning of the 20° century, here you can find souks and handicraft shops.

the main square of the town between the new town and the old Medina. The starting point from where all the main roads of Casablanca branch off.

Notre Dame de Lourdes:
It is a big church built-in 1953-56, inside you can admire the wonderful windows made by the French artist.

Royal Palace:
One of the King residences, you can see it only from outside, with fantastic walls that enclose it and the beautiful doors with a large square just in front of it.

Airport Mohammed 5th:
It is located 30 kilometres far from the town and is an international airport, but on it, they flight even low-cost companies.
You can reach it from the centre of the town is an easy way, by train (leaving every hour), that is connecting the towns of Rabat, Salè, Kènitra, by bus with CTM Company or by renting a car to the AVIS, Budget, Europcar, HERTZ, Sixt, Thrifty offices. 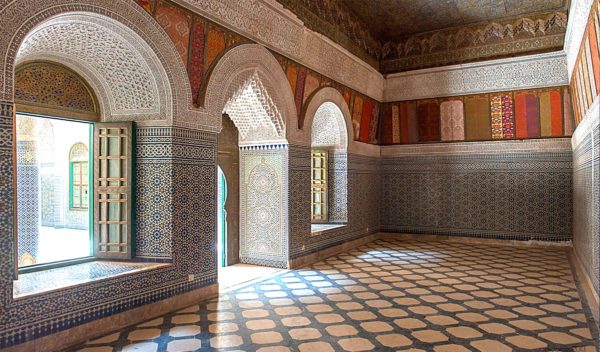 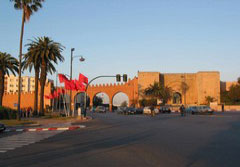