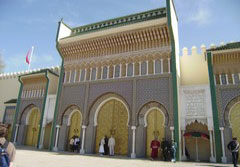 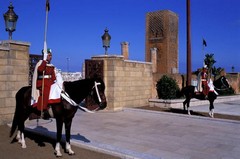 A holiday in Morocco means history and discovering its imperial towns such as Rabat, Marrakech, Meknès and Fès. Ancient cultures, hues, architecture, wonderful old palaces, Madrassa (Koran schools), gardens, scented souks (markets) with a lot of animation…. that means Morocco, a charming country that will touch your heart with its landscapes and the kindness of its people.

The Morocco capital is an immortal symbol of the country, surrounded by extremely long ochre walls, where scented hibiscus grew. 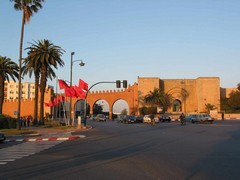 Rabat is a perfect mixture of tradition and modernity. A walk along the town permits you to discover the Royal Palace Hassan II with its gardens with flowers everywhere. The most beautiful are the Oudayas and the one close to the Mellah a necropolis.

Since 1956 Rabat is the political capital of the country; to discover the town you have to visit the huge gate, the Hassan Tower and Mohamed V Mausoleum

The second imperial town of Morocco. It’s a cultural centre and a famous tourist destination.

in the past times was the capital of the country, and nowadays is a lively town. Well known for its souks, full of hues and life.
The main square Djemaa el- Fna is the heart of the town, where you find Berber tradesmen, street singers, snake- charmers…

During the evenings the square becomes an open restaurant. On your trip, you can’t miss a visit to the wonderful town monuments: the Saadian tombs, the Koutoubia minaret (one of the most interesting mosques in the country), surrounded by beautiful gardens.
Bahia Palace was built in 1867 by the Grand Vizier Moulay Hassan, enlarged by his son, later on, he decided to add a mosque, a garden and a Turkish bath, the ancient ruins of al- Badi Palace with its large and huge courtyard, long and wide 100 meters circa, with a bathing pool of 90 meters and precious zellij decorations. From this Palace, you can easily walk to discover the Mellah, the Jewish ghetto, its origin belongs to 1558.
The Saadian Tombs are a wonderful funeral building, built by the sultan Ahmad al- Mansour, from here you can reach the Kasbah, the old part of the town with a lot of lanes.
The Majorelle Garden is located in the new part of the town, the name belongs to the French artist Jacques Majorelle, who in 1919 decided to come to Morocco and live in Marrakech. He collected a large number of plants and nowadays the garden is so rich in cactuses, banana trees, coconut palms, bamboo, coconut trees and jasmines.

A little imperial town not so far from Fès, its history was so famous between the 17th and 18th centuries. During the kingdom of Moulay Ismail, it became the capital and was definite the Versailles of Morocco.
Today Medina is part of the UNESCO World Heritage, the town is quiet and silent, was built on the top of a hill and surrounded by huge walls and from a fruitful valley.
During your walk around the town, you have to visit the Mellah, the Jewish ghetto, or to see the wonderful Bab El Mansour, a wonderful wood gate carving walls and zellij decorations.
A walk along the Medina will permit you to discover different souks.
Around Meknès you can visit the Holy Town of Moulay Idriss and the famous archaeological Roman ruins of Volubilis town.

Fes is the cultural capital of Morocco and a well known touristic destination is the spiritual, cultural, and artisan centre of the country.
The town is divided into two parts Fès el Jèdid (the new town) and Fès el Bali (the old town).
The most important parts of the city are the old Medina, the new one and the French quarter. Built during the 19th century and named Ville Nouvelle with large squares and airy streets.
The old Jewish ghetto, Mellah, has close to it a burial- ground.

The Royal Palace is one of the King Residences, with its wonderful gold doors ( built between 1969 to 1972), close to the new Medina.

The local airport is only 15 Kilometers far from the town, you can reach it by taxi, by shuttle buses (they leave every hour).
Some low-cost companies flights from the main European airports to Fès, such as Atlas Blue, Jet4you and Ryanair; from Italy, there are some regular flights from Bergamo Orio al Serio and Pisa with Ryanair company. 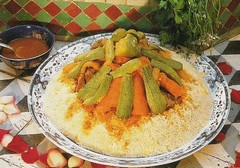 Genuine flavours and gastronomy from Morocco 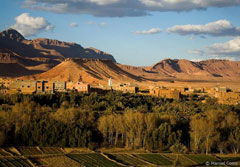 The Atlas, an Huge Mountain Chain